Becky Wade is always a must read for me. Any chance I have to get my hands on one of her books I’m taking it. No questions asked. It doesn’t matter what it is, or what anyone else says about it. I know this one will be no different. My only wish is that I would have read the other three books is this series!

Gray Fowler, star NFL tight end, is being pursued by a stalker, so his team hires a protection agency to keep Gray under the watch of a bodyguard at all times. When Gray meets Dru Porter, an agent assigned to him, he’s indignant. How can an attractive young female half his size possibly protect him?

But Dru’s a former Marine, an expert markswoman, and a black belt. She’s also ferociously determined to uncover the identity of Gray’s stalker. And she’s just as determined to avoid any kind of romantic attachment between herself and the rugged football player with the mysterious past. But the closer they get to finding the stalker, the closer they grow to each other. As the danger rises, can Dru and Gray entrust their hearts–and their lives–to one another?

Okay, then last book in the series 😦 I’m so sad to see this one end. I feel like I’m a part of this community now and don’t want to leave them… But all good things must come to an end, or at least that what they say…

Murder and mystery continue in Book Four of the Cape Refuge series A famous mystery writer has just moved to Cape Refuge when a teenage girl is found murdered. Sheila Caruso–ex-con, mother to Sadie and Caleb, and resident of Hanover House–is working for the writer when she discovers that a scene in one of his novels matches the crime scene. When Police Chief Cade and Blair Owens discover a second dead teenager–mirroring a murder in another of the eccentric writer’s books–Cade is drawn into a web of trickery and deceit. Evidence turns up in Cade’s own truck, and suddenly he becomes the number-one suspect. Cade tries to clear his name, but when eighteen-year-old Sadie Caruso disappears, tensions mount to a fever pitch. Can Cade find the real killer before Sadie winds up dead? Is the novelist a demented killer, or a hapless victim? And what does Sadie’s own mother have to do with the crimes? Secrets are uncovered, while lessons are learned about the sins of the father being visited upon his children. Will the consequences of Sheila’s life be fatal, or is there redemption and mercy for her and her children? “Chief Matthew Cade rarely considered another line of work, but news of the dead teenage girl made him long for a job as an accountant or electrician—some benign vocation that didn’t require him to look into the eyes of grieving parents.”

Still in love! Cant wait to finish this series but sooo sad it’ll be over too soon! Terri Blackstock continues to keep me entrapped on every single page!

Was Lisa Jackson’s disappearance related to politics, her husband’s affair, or her long-term infertility?

Ben Jackson is going head to head with Jonathan Cleary in Cape Refuge’s mayoral race—and he’s even expected to win—when his wife Lisa turns up missing the day before the major debate. Suddenly the town is in turmoil as proof of an alleged affair surfaces, indicating that Ben Jackson might have had motive to kill his wife.

Meanwhile, newspaper owner Blair Owens has other suspicions—and so does Police Chief Cade. Together they dig deeply into the mysterious disappearance that soon spirals into a web of confusion, dark secrets, and unsettling fraud.

Then the town’s psychic reveals the location of Lisa’s body—at the bottom of the river. Even though Blair doesn’t believe his paranormal gift is real, she can’t imagine how he knew where the body was.

The small-town scandal quickly turns into a national media event. Is the murderer one of the obvious suspects . . . or someone they have no reason to doubt?

I have to admit I am in love with this series. Terri Blackstock has hooked me again. Cant wait to see what kinds of craziness happens in this one! 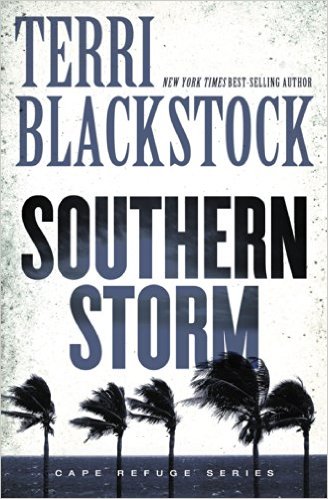 Cade hit the accelerator—just as he saw the pedestrian step into the road.

No one knows who the victim was, where he came from, or why he staggered out in front of Chief Cade’s car. Guilt overwhelms him that he killed the mysterious stranger, until Cade learns that the man had been shot at close-range before he was struck. Determining his identity and finding the shooter becomes Cade’s top priority.

But then Cade vanishes off of the island of Cape Refuge. Rumors spread like wildfire that Cade was involved with the dead man’s wife and that the death was not accidental. Did Cade run to escape murder charges, or has something sinister happened to him?

Terri Blackstock is one of my fav authors. She has a perfect mix of suspense and love. I haven’t found a book of hers yet that hasn’t kept me up late, of continuously turning the pages. If you haven’t read anything by here yet this Cape Refuge Series is a good place to start. For the next four weeks this series is going to be on my #FridayReads and the Review on Tuesdays. Hope you enjoy!

Mystery and suspense combine in this first book in an exciting new 4-book series by best-selling author Terri Blackstock. Thelma and Wayne Owens run a bed and breakfast in Cape Refuge, Georgia. They minister to the seamen on the nearby docks and prisoners just out of nearby jails, holding services in an old warehouse and taking many of the “down-and-outers” into their home. They have two daughters: the dutiful Morgan who is married to Jonathan, a fisherman, and helps them out at the B & B, and Blair, the still-single town librarian, who would be beautiful if it weren’t for the serious scar on the side of her face. After a heated, public argument with his in-laws, Jonathan discovers Thelma and Wayne murdered in the warehouse where they held their church services. Considered the prime suspect, Jonathan is arrested. Grief-stricken, Morgan and Blair launch their own investigation to help Matthew Cade, the town’s young police chief, find the real killer. Shady characters and a raft of suspects keep the plot twisting and the suspense building as we learn not only who murdered Thelma and Wayne, but also the secrets about their family’s past and the true reason for Blair’s disfigurement.

I’m sure you have all seen the previews for this movie by now. My co-worker would say ‘I can NOT wait to see that.’ Me on the other hand, did not get excited until I took a little trip to the store with that co-worker. We had to go to the pen isle, which just so happens to be by the books at our local Walmart (I am seriously UNABLE to go down that isle without looking at the books). So of course, I had to grab it and now I’m super excited to read it, then watch the movie and tell everyone how different it is from the book. So, after it gets passed around the office we will all be talking about 🙂

They had nothing in common until love gave them everything to lose . . .

Louisa Clark is an ordinary girl living an exceedingly ordinary life—steady boyfriend, close family—who has barely been farther afield than their tiny village. She takes a badly needed job working for ex–Master of the Universe Will Traynor, who is wheelchair bound after an accident. Will has always lived a huge life—big deals, extreme sports, worldwide travel—and now he’s pretty sure he cannot live the way he is.

Will is acerbic, moody, bossy—but Lou refuses to treat him with kid gloves, and soon his happiness means more to her than she expected. When she learns that Will has shocking plans of his own, she sets out to show him that life is still worth living.

A Love Story for this generation and perfect for fans of John Green’s The Fault in Our Stars, Me Before You brings to life two people who couldn’t have less in common—a heartbreakingly romantic novel that asks, What do you do when making the person you love happy also means breaking your own heart?